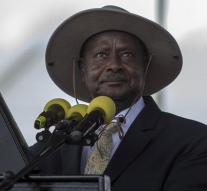 kampala - Ugandan President Yoweri Museveni (71) Thursday in Kampala sworn in for another term of five years.

Museveni in February won the election with 61 percent of the vote. He's since 1986 in power and thus one of the longest serving heads of state in Africa.

Museveni in a speech pledged to increase the (tea) export of the East African country and improve the incomes of the population. The ceremony was attended by among others his Tanzanian counterpart John Magufuli, Kenya's President Uhuru Kenyatta and Zimbabwe's Robert Mugabe. The presence of Umar al-Bashir of Sudan led to criticism from Human Rights Watch. Al-Bashir has been indicted for war crimes in Darfur.

The re-election of Museveni is not uncontroversial. The opposition cried Kizza Besigye, who received 35 percent of the vote, the winner. The claim of electoral fraud was rejected by the Ugandan High Court. Besigye was arrested Wednesday when he wanted to keep his own inauguration ceremony.