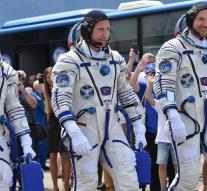 bajkonoer - Three new crew members went to the international space station ISS. These are Alexander Gerst from Germany, Sergey Prokopyev from Russia and Serena Auñón from America. They were launched on Wednesday from space base Baikonur in Kazakhstan. They arrive at the floating lab on Friday, where they will live in the coming months.

Alexander Gerst goes into space for the second time, and the last time was during a football World Cup. Barley then saw from space how his country became world champion. He had taken a shirt from that Mannschaft to the space station. Before the start of that World Cup, Gerst had played a game of space football in a movie with two American colleagues, including floating omissions.

There are now two Americans and one Russian in the ISS. Three other crew members (a Russian, an American and a Japanese) returned safely to earth on Sunday. They had a football with them, which may have a role at the opening of the World Cup next week.