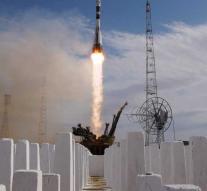 bajkonoer - Three new crew members arrived at the International Space Station on Friday after a flight of about two days. It is a German, a Russian and an American.

They were launched on Wednesday from space base Baikonur in Kazakhstan. They will stay at the station in the coming months. There were already two Americans and one Russian at the station.