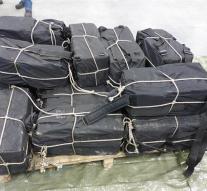 rotterdam - A new cocaine load has been found by the OM in Rotterdam. This time it's 400 kilos worth 10 million euros.

The container came from Panama and was destined for a company in Moerdijk. In 16 black bags there were always 25 packets of coke that have now been destroyed.

Customs received a tip from Rotterdam earlier this week: the tires in the container would have taken drugs. That turned out to be true Wednesday. The HARCteam, a partnership of Customs, Seaport Police and Fiod, has conducted an investigation.

In recent times, it has become a touch in Rotterdam. Yesterday it was also known that two Bredanians stuck after a find of 3800 kilos of cocaine.