Home / World / New border Netherlands and Belgium on the way 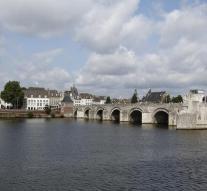 - Netherlands and Belgium go into the Meuse between Maastricht Walloon border village Vise draw a new border between the two countries. This requires, inter alia, an exchange of pieces (almost) island in the river. Thursday draw representatives of the Belgian and Dutch ministries, provinces and municipalities in the City Hall of Visé a memorandum,, '' across the border correction.

Between 1960 and 1980 there is pretty dredged in and around the Maas between Visé and Maastricht. Therefore, the course of the Meuse has been changed. The first winding Meuse was straightened. But as a result, Belgian islets are attached to Dutch territory and vice versa.

Thursday will put a first step towards the border correction, including the exchange of three pieces of vacant land and a few pieces river. As a result, the boundary as usual again comes to lie in the middle.


To enable the border correcting a boundary commission is preparing a final proposal. It is a treaty drafted to be presented to both parliaments.