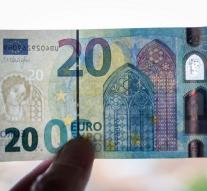 frankfurt - The new bill of 20 euros which is put into circulation on November 25, is virtually impossible to forge. One of the applied security features has been completely remodeled and the technique of it is less than a single banknote used in the world, said the director of the German Bundesbank Thursday.

The 20 euro bill is the third since the introduction of the euro will be renewed in 2002. The notes of 5 and 10 preceded him. The printed silver strip on the ticket can be found at the hologram. Who does that against the light, looks in the window suddenly transparent hologram portrait of the mythical figure of Europe.

The note of 20 in Germany is the most commonly found of all counterfeit euro banknotes. In the Netherlands, the 50 euro note. The new version of 20, like its predecessor especially blue. All the colors used on the bill are somewhat brighter than before.