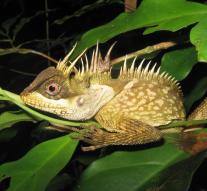 bangkok - Scientists have discovered 163 new animal and plant species in the so-called Mekong region in Southeast Asia. This is stated in the publication issued Monday 'Curious Art Cabinet 'of the World Wildlife Fund (WWF)

Among the finds are a dragon-like lizard (Acanthosaura phuket chinensis) and a hose with an iridescent (oily) sheen (Parafimbrios lao) in rainbow colors.

Hundreds of researchers have contributed to the publication. The new species, mostly plants were found in Cambodia, Laos, Myanmar, Thailand and Vietnam.

The region around the 4,500-kilometer Mekong River is considered very rich in species. Between 1997 and 2015 alone were described 2400 new species. WWF is also concerned about the region that is threatened by growing cities and roads.