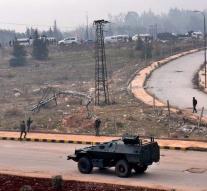 aleppo - The evacuation of people from the last besieged enclave of rebels in Aleppo is possibly still on. A new agreement was reached between the warring parties, said a rebel officer Saturday against news channel al-Arabiya al-Hadath.

The Syrian government has not yet responded to the alleged agreement.