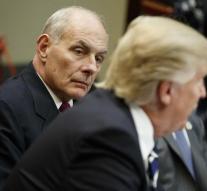 munich - In a new version of the admission of the government Trump are holders of a green card, a temporary residence permit spared. Even if they come from Iran, Libya, Somalia, Sudan, Iraq or Yemen, the holders of the green card may enter the United States.

That said Secretary of Homeland Security John Kelly sat at a security conference in Munich. Even travelers who are already on a plane to the US are at the moment that Washington creates a new entry ban may continue in the country.

Trump announced in late January with a presidential decree on an entry ban was successfully challenged by among others, the state of Washington. A judge in Virginia ruled in another case that the ban violates the Constitution because it is based on religious prejudice. The federal appeals court in San Francisco upheld the ban. Trump announced that he next week, with a replacement measure.