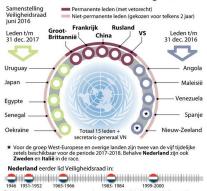 The competitors are Sweden and Italy. For the region Netherlands sits two seats available. One country is therefore outside the boat.

The government has in recent days held a final offensive to get the temporary seat. Both Minister Bert Koenders (Foreign Affairs) and Minister Lilianne Ploumen (Foreign Trade and Development) had traveled to New York for the last lobbying.

The institution focuses on the preservation of international peace and security. It can impose sanctions, peacekeepers deploy and influence policy.