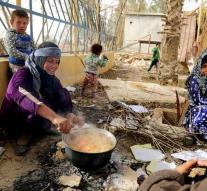 - Netherlands shoots again to help the refugees in Syria. Our country attracts this time 2.3 million euros in humanitarian aid, made Lilianne Ploumen Minister for Foreign Trade and Development Saturday.

The help is for both Syrians who have to survive in appalling conditions in their country for Iraqis who have fled from Mosul to northern Syria. These include for food, water, medical care, mattresses, cooking utensils, clothing and shoes.

The past three years has provided our country for over 296 million euros in emergency aid and since the beginning of the conflict in Syria in 2012, comes to more than 357 million (for displaced people in Syria and refugees in neighboring countries). The Netherlands is in the top ten donors.