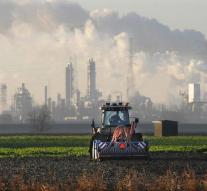 brussels - Netherlands must reduce greenhouse gas emissions in the transport sector, agriculture, built environment and waste by 2030 by 36 percent compared to 2005.

This is contained in a bill presented by the European Commission on Wednesday in Brussels, following the agreements reached at the climate summit in Paris in December. In it, the efforts to achieve the EU climate target for 2030 increased and spread over the 28 individual EU Member States.

Previously belonged to the Netherlands with a reduction of 16 percent by 2020. The goal should be achieved by, among other building renovation, greening the agricultural sector and the use of clean cars, buses and trucks.


According to MEP Gerben-Jan Gerbrandy (D66) Europe will be climate target from Paris this climate distribution plan,, just to 'retrieve.,, The Commission is caught between the national governments who want to do as little as possible for a clean economy. Each tree and each leaf is counted to get out of extra effort, while a clean and efficient economy is precisely necessary to remain competitive in the future. '

The 'climate partition plan' focuses on the sectors covered for the industry outside of the European emmisiehandel system. The transport sector is the fastest growing source of CO2 emissions in Europe. New is that countries may use the forest protection programs in order to meet their national targets.