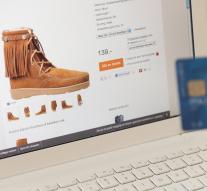 - Dutch include in their online shop behavior among the top five in Europe. The Central Bureau of Statistics (CBS) said that last year 71 percent of Dutch people between sixteen and 75 shopped online. Only in the United Kingdom, Denmark, Luxembourg and Germany are by and large more 'e-shoppers.

On average 50 percent of Europeans shopped online. That was a quarter in 2005. In the Netherlands, the number of online store ass in ten years more than doubled.

It also showed that Dutch are wary of online purchases outside their own borders, according to the CBS. Approximately one third of the Dutch online shoppers buys sometimes in other EU countries. Herein Netherlands is not just.

Not throwing stones, but stone road


This is according to research by the European Commission in part because retailers do not accept foreign buyers. In addition, there are problems with the delivery and often lack confidence.

Luxembourgers appear herein the positive exception, according to the statistics bureau. Nearly nine in ten online shoppers in Luxembourg purchased or goods or services from abroad.

With the growing number of online shoppers is the number of shops in the Netherlands in the elevator. That number is in the last five years more than doubled to 32 000. The number of retailers with an online store grew substantially. With a quarter of the companies that sell online, Netherlands is above the European average of 19 percent.