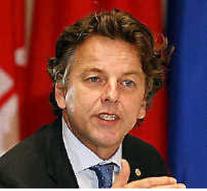 amsterdam - During the upcoming state visit of King Willem- Alexander to China and its partially coincident trade mission rights issue will again be discussed . That has let Bert Koenders, Minister of Foreign Affairs said on Sunday . Who is going to raise the issue , wants a spokeswoman for the Ministry did not say .

Amnesty International had the ministers that maps to go to China called on the human rights violations in China.

Furthermore, they should advocate the release of several jailed human rights activists. The king must touch the subject, as Amnesty lets say a Chinese activist.

Koenders pointed out that the human rights situation in June he has discussed with his Chinese counterpart during his visit to Beijing. Also, the issue was discussed during a visit of a Chinese delegation to the Netherlands early this month. State visit and trade mission starting on 25 October.