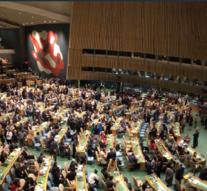 - Netherlands and Italy can go to share a seat on the United Nations Security Council. That heard Wednesday at the UN in New York.

The UN Group of 'western' countries goes about it, unanimous agreement is learned from sources. This means that Italy is represented on the council next year, and the Netherlands in 2018.

Both countries actually wanted two years sitting on the board. But they did not get enough support from the other UN member states.


Minister Bert Koenders of Foreign Affairs and his Italian counterpart Paolo Gentiloni locks them a deal. Koenders called it,, a signal of European cooperation in international politics. '

All members of the Western Group expressed their support and appreciation for the constructive and pragmatic attitude in the Netherlands and Italy. Hence the countries offered a solution to a looming impasse in elections for the seat on the Security Council. Following the unanimous agreement is a thing the next time arranged according to UN procedures.

It is unusual that two countries share a seat. In 1964 and 1965, Czechoslovakia and Malaysia did even a few years before Poland and Turkey.


It is the sixth time since 1946 that the Netherlands as a non-permanent member regaled. The Netherlands has for years lobbied for the spot in the powerful UN body. The board is intended to preserve international peace and security. The board may include imposing sanctions, peacekeepers deploy and influence policy.