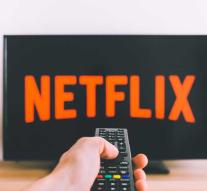 amsterdam - Streaming service Netflix has started a trial where it shows through broadcasts of series through promos of other films and series. Only a small percentage of users can already be seen at this moment.

The promos run completely into the screen, interrupting the film or series that a user was watching. With one press of a button, the promo can be 'left' to return to the interrupted series, Tech Crunch writes.

It concerns series and films that are personalized and according to Netflix thus match the preferences of users. Well thought up, but blood-irritant, many users find.