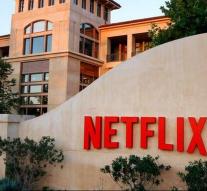 new york - A lot of fans are tickled behind their television or computer in the coming days to watch the new season of House of Cards on Netflix. Shares of the online media company ended a half percent higher on Wall Street at $ 163.22 each. Netflix thus has a market capitalization of more than 62 billion euros.

In April, Netflix had 100 million subscribers, an important milestone for the company. Analysts provide 112 million subscribers in December and 130 million in 2018. Paying members provide the lion's share of Netflix's revenues. In addition to House of Cards, the prison series Orange Is The New Black, the science fiction series Stranger Things and the historic drama The Crown are major public favorites.

Investors also benefited from the growth of the company. Netflix's share rose by 30 percent this year, and analysts expect that the company will only be worth more with the continued growth of subscribers.

Nevertheless, Netflix is ​​particularly affected by increasing competition in the US. Both Amazon, with its Prime streaming service, as Google's Alphabet, is trying to turn into the lucrative market of on-demand video. Facebook also has plans to offer original content to its users.