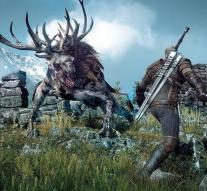 - Online video service Netflix is ​​going to produce a new series based on The Witcher books and games. That made the company public on Wednesday.

The story of the series is about Geralt of Rivia, a Witcher. In the universe of the series are witchers fighters who hunt for monsters. However, samples are getting rarer and the bourgeoisie seems to turn against the monster hunters.

Writer Andrzej Sapkowski is also involved in the production of the series. He becomes 'creative consultant' to ensure that the essence of the story is kept out of the books.

When the series is released and which actors will play it is not yet known.