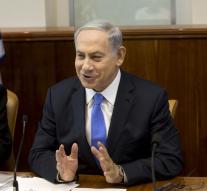 - Israeli Prime Minister Benjamin Netanyahu visited Thursday in Germany canceled for security reasons. There are already ten days of violence in the occupied territories as a result of increased tensions between Israelis and Palestinians.

JERUSALEM Since Sunday, a Palestinian child and a slain Palestinian adult and hit about 170 Palestinians wounded in clashes with the occupation forces .

The authorities in Jerusalem on Wednesday confirmed that the Prime Minister 's trip is canceled due to the increased tensions.