Home / World / Netanyahu : Hitler is not responsible for the Holocaust 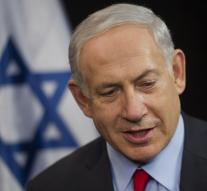 jerusalem - Israeli Prime Minister Benjamin Netanyahu finds Hitler, " not the final responsibility for the Holocaust, " he said at the 37th Zionist Congress in Jerusalem.

According to Netanyahu Palestinians are "responsible" for the genocide of the Jews during World War II.

Netanyahu believes that Hitler, the Jews tried to murder on the advice of the Grand Mufti of Jerusalem, Haj Armin al-Husseini. Netanyahu claims that advised al-Husseini, Hitler, to kill all the Jews "in order to prevent them from Europe towards the toemalige Mandatory Palestine, which was under British control would flee. The Palestinians have an initiated the genocide of Jews," so believes Netanyahu .

Netanyahu made his remark at the time when tensions between the Palestinians and Israelis continue to rise. On the day of his speech came two Palestinians in the fighting in Hebron.