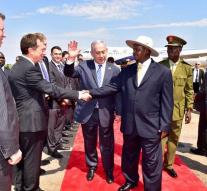 entebbe - Israeli Prime Minister Benjamin Netanyahu is his visit to Africa began Monday in Uganda. At the airport of Entebbe he attended a ceremony in memory of, among others, his brother Yonatan, who was a colonel in the army.

Yonatan was forty years ago at the airport to make life as the leader of the group of commandos who carried out a surprise attack on a hijacked Air France plane. Aboard were several Israeli passengers. Most hostages were released unharmed.,, It touches me deeply to stand in the place where my brother died, '' said Netanyahu.

He previously that Entebbe is always in his thoughts and never let him,, My brother's death has changed my life and put at the current rate. Exactly forty years ago, they landed in the middle of the night in the country of a brutal dictator. A historic mission. Today we put in broad daylight foothold in a friendly country, led by a fighter of terrorism. ''


Netanyahu, who also goes to Kenya, Rwanda and Ethiopia, is on his journey accompanied by a delegation of eighty businessmen. After a meeting with Ugandan President Yoweri Museveni stands before him include a conference program where leaders from South Sudan, Zambia, Ethiopia, Kenya and Rwanda join in Kampala.