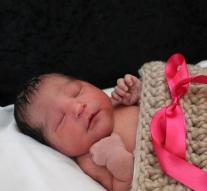 - A Texas woman who faked her pregnancy, went to Kansas, killed an acquaintance and kidnapped her new baby. She now sits on suspicion of murder and kidnapping. That says a police spokesman Wichita.

US media reported that the 34-year-old Yesenia Sesmas from Dallas Saturday was arrested for the murder of Laura Abarca-Nogueda (27) of Wichita and abduct her child. The murder had taken place a week ago. According to police, all the accused and the victim knew each other for a few years.

Sesmas acted her pregnancy for the kidnapping for several months. The police still have no details about the motive. It is obvious that Sesmas a few months ago was a while in Wichita.