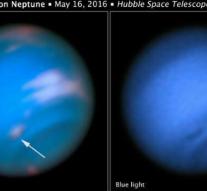 - The planet Neptune has recently acquired a large dark spot. That was in September for the first time. Last month, he was again observed, and thus have received the confirmation scientists.

The spot is a mega storm, which is so great that the United States is fit. It is not the first spot on Neptune. Scientists in 1989 saw a storm that was as big as the Earth, with wind speeds up to 2400 kilometers per hour. A few years later, the stain was gone. Earlier, there were stains on Neptune seen in 1989 and 1994.

The most famous spot in our solar system on Jupiter. That mega storm is two to three times the size of Earth and has been raging for more than 300 years. Jupiter and Neptune are known as gas giants. They have no solid surface like Earth, but consist almost entirely of gas.

'Liquidations Utrecht only the beginning '