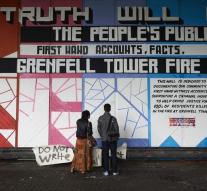 london - The British authorities arrested a man who claimed his wife and son were killed by the lethal tower fire in London. He would have fraudulently tried to get money and housing.

The 52-year-old man reported after the fire in the Grenfell Tower. He declared everything to be lost at the inferno in the tower surface, where dozens of people came alive. The man received help from the authorities who became suspicious after some time. There were contradictions in the story of the 'survivor'.

Research showed that the man did not live in the disaster tower, but in southeast London. Nor would he have had a wife or child. On that occasion, agents struck him on Wednesday. The police warned people trying to strike out the disaster, that all signals of abuse were being thoroughly investigated.