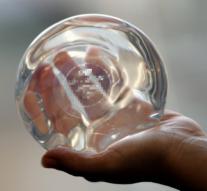 utrecht - The silicone breast implants from the Brazilian manufacturer Silimed bring a 'negligible' risk along with it. Reported that the Health Inspectorate (Inspectorate). Earlier, there were mineral fibers of glass wool and rock wool detected, after which they could be sold for the time being no more.

, There is no reason to remove implants. The risk of removal is greater than the estimated health risk of the particles ', Inspection now says. She makes it in research commissioned by European regulators. What will happen to the ban on sales of the implants is not known yet, according to the inspection.

In the worst situation exists, according to the notification chance of an increased risk of health damage of 1 to 1 million by Simimed-impantaten. Since 2012, the product sold in our country 1700 times.

There has been more concern about implants. In 2010 became a French manufacturer of breast implants discredited when it appeared that they showed an increased risk of rupture and leakage. The Health Inspectorate (Inspectorate) banned the implants from the PIP brand.