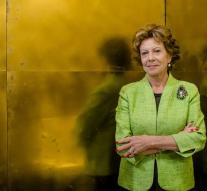 brussels - The European Commission said Friday its former member Neelie Kroes reprimanded. She uttered this week criticized the approach of tax evasion in the EU by the current Competition Commissioner Margrethe Vestager.

,, We understand that sometimes it can be challenging to reconcile the role of former Commissioner with the temptation to publicly reflect the views of them in Silicon Valley or elsewhere who disagree with the European Commission's decisions' the spokesman said.

Vestager summoned the Irish tax authorities Tuesday to recover the US technology giant Apple on overdue tax 13 billion. Apple's European headquarters is in Cork. According to the commission, the tax deals from Ireland with Apple against EU rules.


Kroes, who from 2004 to 2009 self-managed the competition portfolio, expressed criticism in an opinion piece in the British newspaper The Guardian. She now works for Internet company Uber.