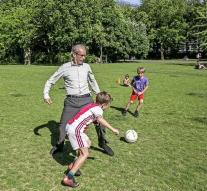 amsterdam - In and around the major Dutch cities, more parks and hiking areas must be built in the coming years. 'Recreational growth is important for public health. In addition, it helps with drainage and cools on heat waves. '

This time a fresh advice about 'recreation in the green'. Because health benefits are also beneficial, the Health Council proposes. In that opinion, she enters into the connection between the amount of nature in the vicinity and general health, mental health and the risk of death, as determined by Dutch epidemiologists in 2015. 'Contact with green can help restore stress and attention and the occurrence of chronic stress,' reminds the Council.

'Green + healthy seems an open door, but it's not!', Explains Fred Woudenberg, chairman of the Health and Environment Signaling Committee, who drafted the advice. 'It's only traitorous that everyone does not believe that environmental green is healthy. But meanwhile everything is tiled and asphalted. And officials at municipalities look at the 'pegs', either the cost of green maintenance and what it produces when a piece of greenery is being built... '

Over the whole country, there is (still) enough offer of recreational greenery, but it is very unevenly distributed, the Health Council Committee determines. 'The Randstad clearly deficits. '

Especially in recent decades, the construction of 'healthy green' has lagged behind the growth and changed population composition, according to the advice. There have been many more elderly people, as well as Dutch-speaking Dutch people who use the recreational green in a different way- they like to come together to picnic with family and friends.

Fred Woudenberg: 'Once upon a time, the Forestry Council proposed to introduce so-called 'smulbosses'. Areas where people could pick fruit and seeds, because that need is clear in certain groups. But the plan stranded, it was experienced as stigmatizing. '

'Our advice is not very revolutionary!', Says Professor Pim van Gool, the general chairman of the Health Council (and neurologist in the AMC) almost apologetic. 'But green, more nature in and around the city, moves to more movement and can thus counteract the aggravation of overweight and obesity, as well as related diseases such as diabetes and cardiovascular disease. Urbanization is problematic in this respect, as society, we must seek a good balance to achieve healthy, sustainable and climate-proof cities. '

And his committee chairman replies with: 'You're not a city like a few beautiful bermen and some attractive biscuits... Also beautiful, but that's green!'