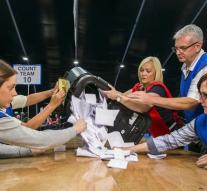 newcastle - The first 'Brexit'-election from England came in the night from Thursday to Friday in Newcastle. The difference between the Leave-and Remain Camp was extremely small: 50.7% of voters in the northern district will remain, 49.3% opt for a departure from the European Union. Advance was expected a pronounced 'stay' in Newcastle. Pollsters held on 60-40.

The latest polls Thursday showed that 52 percent of 'stay' would choose, against 48% for a departure. The rise in Newcastle was at 68%.

All night are votes counted in Britain. Possibly the rash around 04. 30 am (Dutch time) known.


In the district of Sunderland was profit for the 'Brexit' camp expected, but according to the BBC, which was higher than expected. 61% chose a departure, only 39% want to remain faithful EU.

UK polling stations are at 22. 00 pm local time (23. 00 pm Dutch time) closed. Who at that time standing in line could still vote in the referendum on whether to remain a member of the European Union.

Total should be counted the votes in 382 districts.