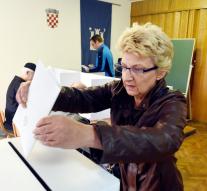 zagreb - Sunday 's parliamentary elections in Croatia seem to be turning out to be a neck-and- neck race between the conservative opposition party Croatian Democratic Union (HDZ) and the ruling Social Democratic Party (SDP). This is evident from an exit poll that showed the Croatian state television Sunday.

According to this poll, both parties win 56 seats in the 151 seat parliament. A third party, Most, would be good for eighteen seats, by which it gets a potentially crucial role in the formation of a coalition government.

The electoral commission is expected to arrive later in the evening with the first preliminary results.