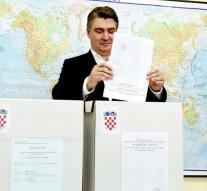 - "The Croatian parliamentary elections are as expected resulted in a neck-and-neck race between Social Democrats and conservatives. The camps, according to an exit poll on state television just one seat each."

"The Social Democratic Alliance SDP according to the poll with 58 seats, the largest party in the 151-member parliament. The conservative HDZ seems to be able to count on 57 seats. The winning party must presumably with the center-right party Most-turn for support. Must remain stabbing in the poll on 11 seats."