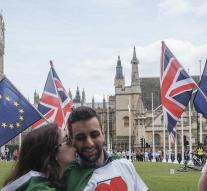 london - Two days before the Brexitreferendum the British still seriously divided over whether they should or should not leave the European Union.

According to a recent poll, 45 percent of voters that they would prefer the EU 44 per cent should continue and get out. Earlier this week, the ratio was 45 to 42 percent.

Thursday go Britons go to the polls to determine the future of Europe. World leaders, investors and companies try their best to keep the EU Britain. An activity would cause in their political and economic influence of the land damage and create turmoil on the world markets.

UKIP leader Nigel Farage shows the new poster of the proponents of a departure from the EU.

Both sides enter the final days of the battle for the referednum on. The 'remainers 'who like to stay put celebrities like David Beckham in the EU. 'For our children and their children, we must face together the problems of the world, and not only,' he said.

Opponents point to the large influx of migrants appeared barely to contain by EU agreements. A poster of anti-Europe party UKIP shows a traffic jam with the text: 'The school is overflowing.' One in four schools is namely overcrowded.