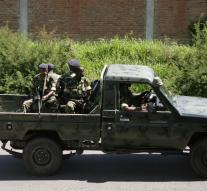 bujumbura - At the attacks by armed rebels in the capital of Burundi Friday nearly ninety deaths. Burundi 's army has reported Saturday.

The unrest began when armed men opened the assault on three military bases in Bujumbura. That led to a whole day of firearm violence. Among the dead are also military.

The violence has to do with opposition to President Pierre Nkurunziza. He introduced himself in April for a third-term candidate. Opponents, often known as the Sindumaja, see this as a violation of a 2005 agreement that ended the civil war. Nkurunziza won the disputed election in July.

Western countries, including the US, have condemned the violence in Bujumbura. They fear that Burundi is sliding towards civil war.