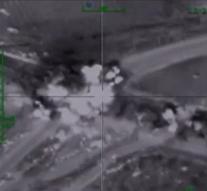 london - Approximately six hundred people have died since Russia a month ago began bombing terror group Islamic State (IS) in Syria. 185 victims are civilians, said the Syrian Observatory for Human Rights Thursday. The other 410 are dead IS militants of various militias.

Russia bombs since the end of September in Syria and gets in his own words IS only goals. Moscow itself has denied so far that citizens have been slain by the air strikes.

The Syrian Observatory is located in England and reported on the authority of witnesses and activists in Syria about the situation there.