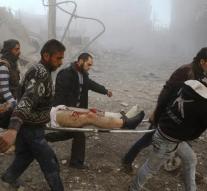 washington - Certainly 484 civilians have probably died since the US performed air attacks on Islamic state in Iraq and Syria at the beginning of 2014. That states the US Army during a monthly update.

According to the army, 132 civilians lost their lives by air attacks in April. The army does not think that the growing number of deaths is due to looser handling of rules that should occur, but especially to the increasing number of operations in inhabited areas.

The US Army's estimates are much lower than those of activists in the areas.