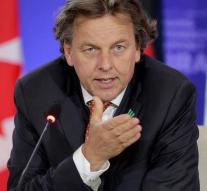 - Wednesday the 24 countries attending a donors' conference on Iraq, jointly converted 1.9 billion euros on the table laid for assistance to the country. Advance was calculated at slightly less, namely 1.8 billion.

The organization was in the hands of the United States, which had invited the 23 other countries to the Washington Capital. According to the US State Department there is still more to come, because some countries have pledged additional amounts.

Ministers of Foreign Affairs and Defence of the 24 participating countries to provide financial support for Iraq in its fight against Islamic State.