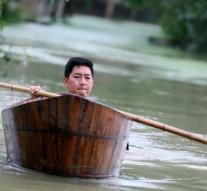 - During major floods in the eastern Chinese province of Anhui have been nearly a hundred alligators escaped from the Anhui Research Center of Chinese Alligator Reproduction.

Local authorities have warned the population of the animals, but there seems to be no cause for concern. Most alligators are already caught, reported the authorities Shanghaiist according to the news site. com Thursday.

The escaped animals represent only a small fraction of the approximately 10 000 reptiles that live in the center. The Chinese alligator or Yangtze alligator is almost extinct in the wild, except around the flooded research center. We're working on the survival of the species.