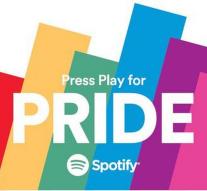 - Spotify launched in late June #PressPlayForPride for the LGBTQ community. Besides Pride playlists of famous names like Conchita Wurst and Kelly Osbourne subscribers could also build your own list. The total now stands at more than 975,000 playlists.

In preparation for EuroPride 2016 this weekend in Amsterdam Spotify looked at the most popular songs in Pride playlists on Spotify. Lady Gaga with 'Born This Way' both globally and in the Netherlands at the top. The top three is completed here with ABBA (Dancing Queen) and Anita Meyer (Why Tell Me Why). Worldwide, Britney Spears (Toxic) and Drake (One Dance) in second and third place.

Most popular Pride numbers in the Netherlands:


The most popular songs worldwide: