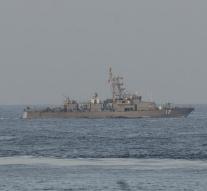 washington - An American navy ship discharged warning shots on Tuesday in a Persian Gulf near an Iranian vessel. According to a US official, USS Thunderbolt gave warning shots when the Iranian ship was 150 meters away. The Iranians, presumably of the Revolutionary Guard, had not responded to attempts to communicate over the radio.

Similar incidents occur more frequently in the Persian Gulf. An American torpedo shooter solved warning shots in January when four Iranian patrol boats approached at high speed. In January 2016, Iran even captured ten American sailors, who were released after a short while.

Donald Trump said during his election campaign in September that if he was president, Iranian ships battling the American fleet in the Persian Gulf would 'be crushed out of the water.'