Home / World / Navy is going to help in Haiti 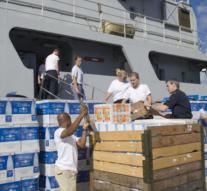 - The Dutch navy is from Curacao towards Haiti there to provide relief. The Dutch tend to focus on assistance in the southwest of the island, which last week was hit hard by Hurricane Matthew. This was announced by the Ministry of Defence on Monday.

Sr. Ms. Holland with manpower and the first shipment of goods including food and water en route to Haiti. Aboard the first Navy ship additional marines, medical staff and people from the Red Cross. There are also specialists who can identify damage to waterways and the bottom of the ports to determine where aid ships can dock. The second vessel, Zr. Ms. Pelican, will follow as soon as possible with more goods and people.

According to the United Nations, some 1.4 million Haitians need help. According to Minister Lilianne Ploumen (Foreign Trade) is quick help because Haiti barely recovered from the earthquake of 2010. Even when the Netherlands offered assistance. 'Tens of thousands of people were still living in tents and temporary houses and were especially vulnerable to the destructive power of this hurricane. And now again become heaps of people injured or homeless. By now quickly present we can prevent further deterioration of their situation, 'said Ploumen.