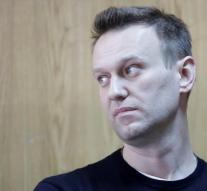 kirov - A Russian court has again appealed opposition leader Aleksej Navalny on Wednesday to a conditional five-year sentence. The case was reversed after criticism of the European Court of Human Rights (EHRM), reported Russian state media.

Navalny's lawyer announced Wednesday that he would appeal again to the European Human Rights Court. The case can affect the political career of the opposition leader, who wants to participate in the presidential elections in 2018. According to Russian officials, his conviction makes that impossible.

A lower court sentenced Navalny earlier this year to a conditional sentence for eclipse. This case was reversed after the EHRM had ruled that Navalny had not had a fair trial. The new lawsuit eventually did not lead to a lower penalty.