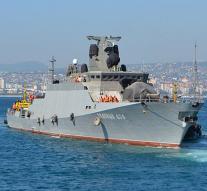 brussels - NATO is concerned that the Russian fleet sailing through the Mediterranean towards Syria, is used for more bombing of Aleppo. That said the chief of the military alliance Jens Stoltenberg Tuesday in Brussels.

The Russians have the right to sail through international waters, acknowledged Norwegian former prime minister. Stoltenberg called it worrisome if Moscow would intensify shelling in Aleppo. 'That would worsen the humanitarian situation. 'He called on Russia to honor agreements on a cease-fire.

The Russian navy ships, including an aircraft carrier, perform Friday by the Channel. Spain reportedly has granted permission fleet to refuel on its territory and maintenance. Each country can decide whether supplies the Russian ships, said Stoltenberg.

Guy Verhofstadt, leader of the liberal group in the European Parliament, responded more pronounced. Spain last week signed an EU declaration on possible Russian war crimes in Aleppo, recalled the Belgian politician. 'And today it helps to refuel the fleet is on its way to commit more atrocities. Seriously? '

NATO is not involved to share in the struggle in Syria but supports the anti-IS coalition in Iraq and Syria under American leadership by information from AWACS radar planes. The first flight was on October 20 and more to come. Stoltenberg said it is important to find that the Western alliance, the coalition helps to get a better picture of the situation on the ground. 'We continue to IS is defeated. '