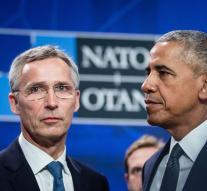 warsaw - NATO now in command of the US missile shield in Romania was partially operational in May. That Friday decided at the NATO summit in Warsaw. The transfer is done, inter alia, at the insistence of France.

The expensive system is intended to keep ballistic missiles from Iran or North Korea for example, allows NATO. Russia sees the shield as a threat and Romania and Poland, where another part of the shield is ready, warned earlier in 2018.

The Americans hope that the transfer reassure the Russians. NATO chief Jens Stoltenberg reiterated that,, umbrella 'is purely defensive and poses no threat to Russia's nuclear deterrent.


Radar systems in Turkey and on naval vessels are also part of the shield. Advanced sensors can also be connected to the system on a Dutch frigate. The shield is controlled from an army base in the German Rammstein.