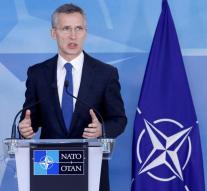 brussels - Russia must ' significant 'influence use by separatists in eastern Ukraine to quell the violence flared up. That message gave Secretary-General of NATO Jens Stoltenberg on Wednesday in Brussels.

The cease-fire was violated last week more than 5600 times, the worst growth in a long time, according to Noor. According to him, 20 000 people are without heat, water and electricity, especially around the place Avdiivka in Donetsk.

Stoltenberg called on the parties to stop immediately the shelling and withdraw heavy weapons as agreed in the Minsk agreements. The UN Security Council called on Tuesday even though complying with the agreements. Both Russia and Ukraine voted for the call to respect the ceasefire.