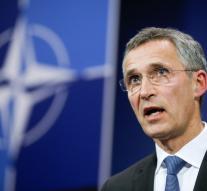 brussels - NATO believes that Turkey keep his composure after the shooting down of a Russian fighter plane near the border with Syria Tuesday. After the incident came to the 28 NATO ambassadors for a special meeting at the request of Turkey in Brussels. The Turkish president Erdogan in Ankara meanwhile, defended his country 's right to defend its borders.

NATO has announced solidarity Turkey. But NATO Secretary General Jens Stoltenberg, however, looks like meanwhile that the Turks and Russians continue to get in touch with each other in connection with the incident. Ankara accuses Moscow of violating its airspace and the Russians deny that emphatically.

NATO itself has no contact with the Kremlin had on the matter yet, Stoltenberg said.