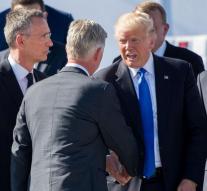 brussels - NATO spokesman Jens Stoltenberg is convinced that US President Donald Trump is fully behind NATO and the principle of common defense. That he said on Thursday evening after the NATO summit in Brussels.

'He was fine in his demand that allies should spend more money on their defense, but at the same time he was aware that the United States felt bound to the alliance,' said Stoltenberg. He pointed out that the US would make more money in the defense of Europe.

The Secretary-General did not emphasize the fact that Trump, in a breach of tradition, did not openly bound to Article 5 of the NATO Treaty, which obliges Member States to help each other if one of them is attacked.

The fact that Trump unveiled a monument in memory of the attacks of September 9, 2001- when Article 5 was first called for- was, according to Stoltenberg, enough evidence that Trump felt bound to NATO principles.