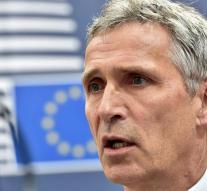 warsaw - Deterrence is central to the NATO Summit of Heads of State and Government meeting in Warsaw Friday and Saturday for their biennial meeting. The military alliance wants,, robust '' respond to Russia's increased assertiveness.

The leaders will decide soon four multinational battalions each alloying 1,000 men in Poland and the Baltic states, in response to living there fear a continuation of the Russian annexation of Crimea and Moscow's involvement in the Ukrainian conflict.

The troops will rotate, to fulfill commitments made in the nineties that NATO is not going to settle permanently militarily in Eastern Europe. Netherlands produces more than 150 soldiers who came under German command.


Although the Western alliance is not strengthened since the end of the Cold War, NATO stressed that it is collective defense and solidarity. NATO chief Jens Stoltenberg also refers repeatedly to the importance of a political dialogue with Moscow. Next week, then feel free to ask a NATO-Russia Council in Brussels on the program, which Moscow.

Other topics on the agenda are migration, the fight against the terrorists of the Islamic State and the strengthening of the military resistance of Afghanistan, Iraq, Jordan, Libya and Tunisia. On closer cooperation between NATO and the European Union, especially against cyber attacks and propaganda, signed Friday a statement. In the margin is certainly the Brexit be addressed.

Furthermore, the deployment in the Aegean, Mediterranean and Black Sea discussed, as well as the anti-missile shield in Romania and the role of AWACS radar aircraft in the fight against IS.


Defense spending also come to the table. Two years ago it was agreed to work in Wales to a defense budget of 2 percent of gross domestic product. Although the decline is arrested, EU member states remain stabbing average at around 1.4 percent. Netherlands sits there by about 1.15 percentage sharply lower.