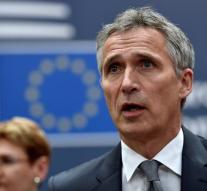 brussels - Now the UK has chosen to leave the European Union is even more important that the EU radiates power. Therefore, NATO welcomes the new EU strategy for foreign and security policy, which calls for more European military cooperation.

That said NATO chief Jens Stoltenberg on Tuesday in Brussels, where EU foreign policy chief Federica Mogherini presented the strategy to the Government.

,, A strong EU is important for all of us, including NATO, and that has not changed after the British referendum, '' said Stoltenberg.,, I welcome the strategy, which also provides for closer cooperation between the EU and NATO in the area of ​​cyber security, hybrid threats, and in the Aegean and Mediterranean. '


Britons pay almost a quarter of the total European contribution to NATO, recalled the former Norwegian prime minister.,, For NATO, the United Kingdom remains a strong and committed partner and ally. The British position in NATO is unchanged. ''