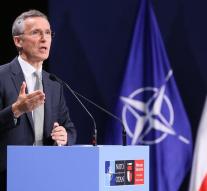 warsaw - In an effort to reduce the breeding ground for terrorism, NATO is intensifying its activities in the Middle East and North Africa. Key is to increase the stability in those regions. Political leaders agreed at the NATO summit in Warsaw Saturday also with measures in the fight against terrorist organization Islamic State.

NATO chief Jens Stoltenberg spoke of,, pushing back 'of violent extremism.,, The instability in the region has a direct impact on our societies. The scale of the challenge requires that we take immediate action. ''

As the military alliance will now train the Iraqi army in Iraq rather than in Jordan. Also may collect information from the NATO AWACS radar aircraft to be shared in the future with the US-led anti-IS coalition. NATO member states also pledged to share more intelligence about terrorist threats.


In addition, the alliance will continue to support Afghanistan, with 12 000 troops in the mission Resolute Support and funding for the Afghan armed forces. NATO is also ready to help Libya to counter terrorism. At sea, the bet is too intense. Advice and training in the region, including in countries such as Georgia and Moldova, have to increase their resilience.

A digital attack on a Member State is now seen as an attack on all. Not only Russia, but also IS knows how cyber attacks to be carried out, for example, banks or energy, says Minister Jeanine Hennis (Defence).,, That is the battlefield of today actually, but at least tomorrow. The enemy comes out of the socket. That's right, we can not ignore. ''

Whether the world has become safer after the NATO summit Prime Minister Mark Rutte did not answer yes or no.