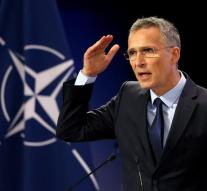 brussels - NATO spokesman Jens Stoltenberg expects an increase in defense spending of European allies and Canada of 4.3 percent in 2017. That said the Secretary-General Wednesday, meeting a day for the Ministers of Defense in Brussels.

Over the last three years, Europe's allies and Canada have 'increased their defense spending by nearly 46 billion,' said Stoltenberg. 'The trend is rising and we plan to keep track. This year, 25 allied countries have pledged to increase their real defense spending. '