Home / World / NATO is making a coalition against IS 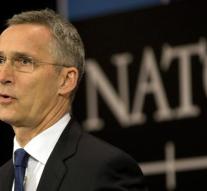 brussels - NATO becomes a member of the coalition fighting in Syria and Iraq against the terrorist movement IS. That decided the 28 member states on Wednesday. The decision will be ratified on Thursday at the NATO summit in Brussels by government leaders, reported diplomats involved.

The US-led coalition has more than sixty countries, including all NATO member states. NATO's membership as an organization is seen primarily in Europe as a symbolic step.

Germany and France, for example, do not really exist because the military alliance is aimed at self-defense. But because US President Trump wants to make NATO more active against terrorism, they have resigned. NATO chief Jens Stoltenberg said earlier that a fight for the alliance was not discussed.